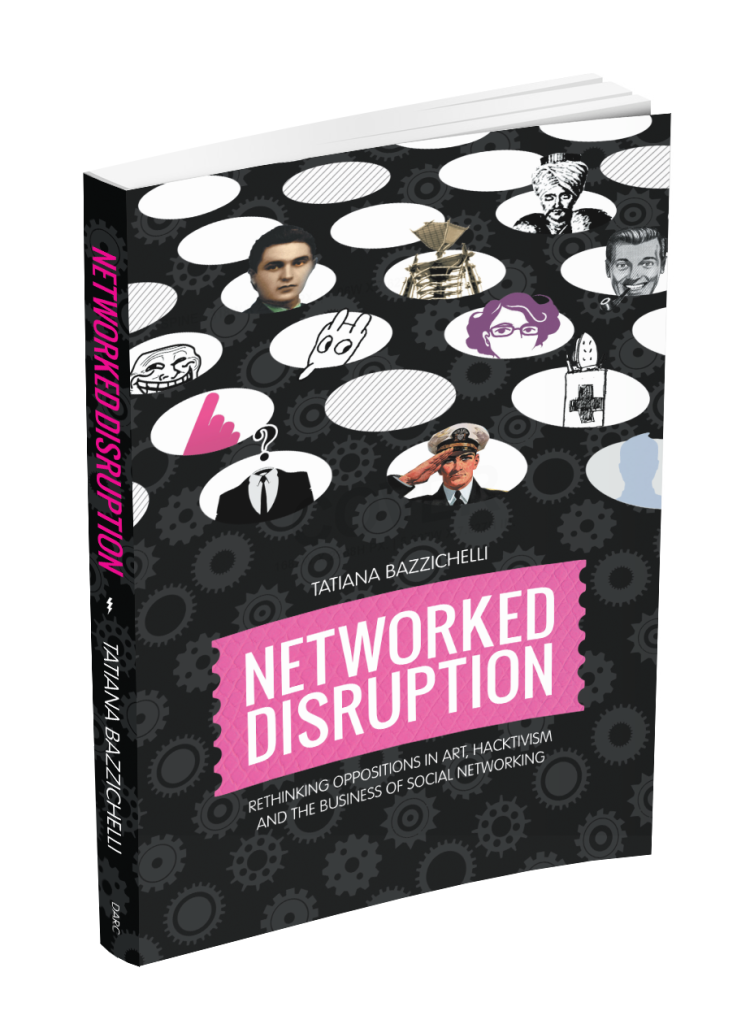 Rethinking Oppositions in Art, Hacktivism and the Business of Social Networking

Read the Table of Contents

The current techno-economic paradigm of Web 2.0 has challenged notions of art and hacktivism within digital culture. The book “Networked Disruption” takes up this challenge and discusses a new perspective on political and social criticism. It simultaneously asks what are the conditions for hacker and artistic practices under Web 2.0 and how can social networking be seen to build on and incorporate artistic practices from the earlier decades of digital and network culture.

Through its theoretical discussion of contemporary art and hacktivism, the book maps out a new contradictory space for art and criticism: Networked disruption.

What is the book about?

After the emergence of Web 2.0, the critical framework of art and hacktivism has shifted from developing strategies of opposition to embarking on the art of disruption. By identifying the emerging contradictions within the current economical and political framework of Web 2.0, the aim is to reflect on the status of activist and hacker practices as well as those of artists in the new generation of social media (or so called Web 2.0 technologies), analysing the interferences between networking participation and disruptive business innovation. Connecting together disruptive practices of networked art and hacking in California and Europe, Tatiana Bazzichelli proposes a constellation of social networking projects that challenge the notion of power and hegemony, such as mail art, Neoism, The Church of the SubGenius, Luther Blissett, Anonymous, Anna Adamolo, Les Liens Invisibles, the Telekommunisten collective, The San Francisco Suicide Club, The Cacophony Society, the early Burning Man Festival, the NoiseBridge hackerspace, and many others.

The objective of this book is to rethink the meaning of critical and oppositional practices in art, hacktivism and the business of social networking. The aim is to analyse hacker and artistic practices through business instead of in opposition to it. Shedding light on the mutual interferences between networking participation and disruptive business innovation, this book explores the current transformation in political and technological criticism. The analysis poses the following questions: Is the business of social media co-opting DIY culture? How can hackers and artists be critical in the business context of social media? Is it possible to respond critically to business without either being co-opted by it or refusing it? Is criticism only possible through opposition?

Disruption becomes a two-way strategy in networking contexts, a practice to generate criticism, and a methodology to create business innovation. Connecting together disruptive practices of networked art and hacking in California and in Europe, and comparing North American and European political traditions, Tatiana Bazzichelli proposes a constellation of social networking projects that challenge the notion of power and hegemony.

A new perspective for social and political criticism

By describing the concept of “disruptive business” as an art practice, Tatiana Bazzichelli’s analysis becomes an opportunity, both for academics and practitioners, to imagine new possible routes of social and political action. Distributed, autonomous and decentralised networking practices of disruption become a means for rethinking oppositional hacktivist and artistic strategies within the framework of art and business.

Bazzichelli’s hypothesis is that mutual interferences between art, hacktivism and the business of social networking have changed the meaning and contexts of political and technological criticism. Hackers and artists have been active agents in business innovation, while at the same time also undermining business. Artists and hackers use disruptive techniques of networking within the framework of social media, opening up a critical perspective towards business to generate unpredictable feedback and unexpected reactions; business enterprises apply disruption as a form of innovation to create new markets and network values, which are often just as unpredictable. Bazzichelli proposes the concept of the art of disruptive business as a form of artistic intervention within the business field of Web 2.0. The notion of disruptive business becomes a means for describing immanent practices of hackers, artists, networkers and entrepreneurs, which are analysed through specific case studies.

What does this book add to the field?

This book analyses artistic practices through business disruption instead of in opposition to it. The concept of business, which has become so common in Anglo-Saxon daily life and language is far from obvious, and deserves a deeper critique. An analysis of how business (“being busy”, in the context of Protestant culture) relates to political and aesthetic disruption is needed in the field. Many activists usually prefer not to deal with the notion of “business”, confining it to the domain of commercial market logic. The book demonstrates how artists-critics use business logic knowingly, how they “co-opt the co-optation”. Tatiana Bazzichelli’s proposal offers some ways to overcome the apparent dialectical deadlock that currently characterizes the dichotomical process of invention/subsumption. Connecting disruptive practices of networked art and hacking in California and Europe, it offers unique insights into the techno-social and material processes that constitute the art and activist projects under scrutiny. The projects are positioned within a rich context, both on theoretical and practical levels, and across historical and contemporary modes. The concept of “The Art of Disruptive Business” includes suggestions for future effective critical strategies that recombine critical art practices and disruptive business.

This book adopts a comparative approach not only conceptually (researching the mutual interferences between business and disruption), but also by shedding light simultaneously on heterogeneous practices of hackers, artists, networkers, activists and entrepreneurs, who engage deeply with network activity. This practice-based research also becomes a methodological challenge. The theoretical viewpoint of this research is closely connected with the act of being a direct part of the research subject, creating a mutual exchange with the actors of the analysis through conversations and interviews as well as participating in some of the projects described in the book. The method is based on the reformulation of a research approach, which functions within the subject of research, rather than on the subject of research. The result is a methodological constellation of networking practices, which aims to actualise – and to question – the notion of “fieldwork” itself.

3 replies on “Networked Disruption – The Book”