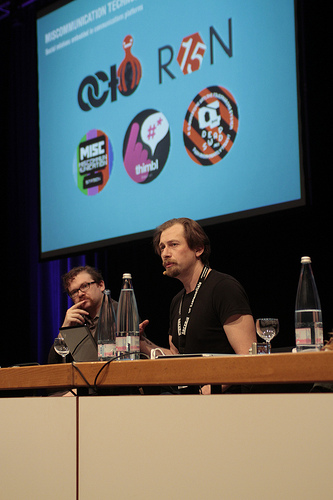 This panel adopts the concept of “Disrupting Bureaucracy” as a comparative standpoint to analyze grassroots artistic interventions in the digital and analog framework of contemporary social networking. In order to understand the present configuration of social media practices, the intention is to recontextualize the networking concept itself by referencing the development of networked art from the second half of the twentieth century to the present. Practices of Mail Art and experimental visual poetry generated peer interventions in the bureaucracy of everyday life through the production of postal and rubber stamps, stickers, envelopes, postcards etc. as objects of exchange. With the emergence of social media and Web 2.0, enabling communities has become a pervasive business strategy, but also a great opportunity for critical reflection of the meaning of sharing and collaborating. By discovering the dark side of the gift-exchange economy, we ask if it is still possible to imagine “intimate bureaucracies” that are able to intervene in the frame of networking by generating disruption and the creative appropriation of market logic. By highlighting the abundance of paradoxes in networked systems of organization and control in social media and beyond, the brief is to investigate decentralized alternative models—from “miscommunication technologies” to other “imaginal machines.” Bureaucracy is seen as both a parody of itself and a challenge to establishing unexpected connections toward producing autonomous forms of organization.

Tatiana Bazzichelli is a researcher, networker and curator, working in the field of hacktivism and net culture.
Stevphen Shukaitis is a lecturer at the University of Essex and a member of the Autonomedia editorial collective. Since 2009 he has coordinated and edited Minor Compositions.
Craig Saper is the author of Intimate Bureaucracies (2012) and Networked Art (2001). He curated exhibits on TypeBound (2008), and folkvine.org (2003-6).
Dmytri Kleiner is a Canadian artist, member of the Telekommunisten collective, living and working in Berlin.
Karla Sachse has been engaging intensely in Mail Art, street actions, visual poetry, installations in space and language areas.
Lutz Wohlrab has been active in the Mail Art scene since 1985.
Image: Felipe Tofani / transmediale
More info