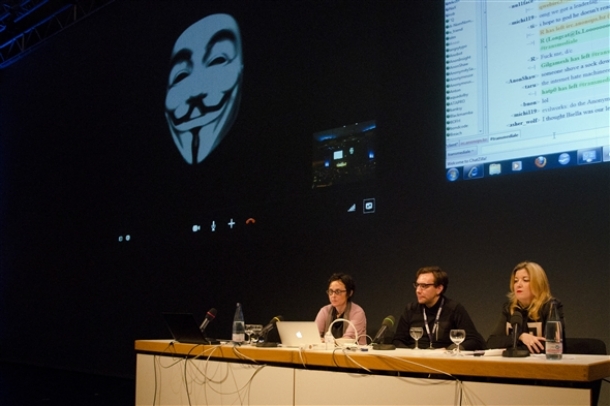 In the book Pranks! (Re/Search, 1987), V. Vale and Andrea Juno pointed out that pranks, tricks and ludicrous actions are functional to express a continual poetic renewal, using the elements of surprise, irony and social criticism. Since that time the strategy of anonymity, as the critique of a rigid identity, and the creation of a multi-use philosophy of sharing, has been functional in redefining art practice through disruptive interventions, as well as served as a tool to reflect on the meaning of authority. Today the strategy of anonymity is still a vehicle to question the institutional media system and has often plunged it into crises by exposing its bugs and highlighting its vulnerability. But, mixing up with contemporary social media culture, being anonymous means to produce a new aesthetics – new linguistic codes – where poetic images, disruptive strategies (such as trolling and DDoSing) intertwine with multiple possibilities for lulz and pleasure. Is anonymity a tool for distributed and viral political struggle or is it the endless trick of an intangible crowd of pranksters?

Jacob Appelbaum works as a developer for The Tor Project and as a staff research scientist at the University of Washington Security and Privacy lab.

Gabriella Coleman is an anthropologist with an interest in computer hacking. She is Wolfe Chair in Scientific and Technological Literacy at McGill University.

Dana Buchzik (born 1983) is a student of cultural science and aesthetic communication. She writes prose and poems, is currently working on her first novel and runs a blog.

Krystian Woznicki (Glatz, 1972) is a critic and publicist. He lives and works in Berlin.

Tatiana Bazzichelli is a researcher, networker and curator, working in the field of hacktivism and net culture.

Anonymous is potentially everyone.